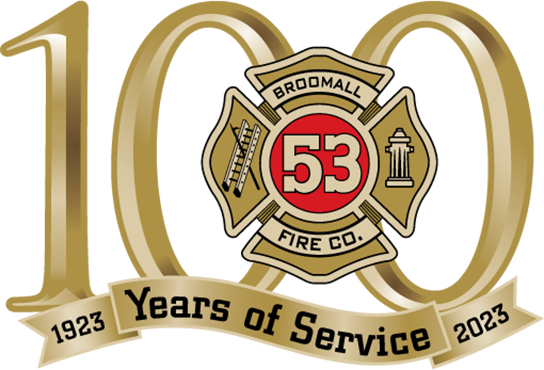 History of The Broomall Fire Company

Proudly Serving OUR Community Since 1923

At the urging of Ernest Dupille, twenty-six men met on December 18, 1922 with the purpose of forming a volunteer fire company to serve the residents of Marple Township. At that time, Marple Township’s 11 square miles was a rural community of farmers and tradesmen. Its population centered on the small town of Broomall, located along West Chester Pike and Sproul Rd. The town was serviced by a trolley line running between Upper Darby and West Chester.

On January 8, 1923, the group met again to approve a constitution and company by-laws. During this meeting, Mr. Dupille was elected President and W.E. Clark, Sr. was elected the first Fire Chief. In the ensuing months, much work was done by these men to assure their idea grew to fruition. In May, a lot was purchased on West Chester Pike near Sproul Rd. for nine hundred dollars. It was raised in nine days from the pockets of the original twenty-six men and other community residents. In August, the official charter of the Broomall Fire Company was adopted and signed by sixty men. A manually-operated gong was received from the Oakmont Fire Company to act as an alarm and it was placed on the recently purchased lot. Two hand extinguishers were received from the Highland Park Fire Company and resident Alphonso Fox donated a hand-drawn hose reel.

In 1924, the tradesmen within the Company, donated their skill and talent and erected a two-story stone building on the West Chester Pike lot. It became the first home of the Broomall Fire Company. In July of 1925, the Company purchased its first motorized piece of apparatus for $5,700. It was an American La France pumper.

On May 15, 1926, the Company conducted its first fund drive collecting $284.50. In the early years, financial difficulties consistently plagued the Company. In 1933, the bank holding the mortgage on the fire house closed the Comapy’s doors and an attorney was appointed to oversee the Company finances. Township resident Elizabeth Barnes took over the mortgage and the Company held dinners, plays, and other activities in a constant effort to raise funds. In 1938, the Company put in service a field-fighting unit built on an old school bus chassis purchased from the school district for one dollar. It was not until 1944 that the Company was able to afford the purchase of a new Mack pumper. In January 1948 , the Company celebrated its 25th anniversary. The 50’s were a time of rapid growth for both the Township and the Fire Company. In 1954, the fleet consisted of two Mack pumpers, an International field piece, and a new equipment truck built on an International chassis. As apparatus and equipment needs continued to expand, the need for additional space in the f ire house grew critical. In January 1956, the company purchased property on North Malin Road at West Chester Pike and placed the existing fire house up for sale. On June 10, 1957, ground was broken for the new fire house. It was completed and dedicated on November 2, 1957. In 1958, the Company took delivery of two new trucks, an FWD pumper and field piece. Two-way radios were installed on all trucks.

Growth continued in the sixties with the two Macks and the International field truck replaced by two new FWD trucks similar to those purchased previously. A Jeep brush truck and a Chief’s car were also purchased. However, the most significant addition to the fleet occurred in 1965 when the Company took delivery of a High Ranger articulating aerial platform (Snorkel) mounted on an FWD chassis. This necessitated the addition of a third bay onto the fire house.

The 70’s and 80’s brought new firefighting equipment and apparatus. This led to two more structural additions to the fire house and the purchase of an adjacent residential property that is used exclusively as offices. Also, it brought to an end the sounding of the fire house siren and ringing of house bells for all alarms. Instead, members were issued state-of -the-art pocket pagers. New firefighting helmets, coats, pants, and boots were introduced along with improved air packs. In January 1973, the Company celebrated its 50th anniversary.

The 90’s brought major advancements in firefighting equipment and apparatus. In 1995, a new pumper designated 53-4 was placed into service. This truck was actually a conversion piece in which the body, pump and other equipment from an older truck were mounted on a new HME chassis. This enabled BFC to add a major pumper to our fleet while meeting current firefighting standards. Also, it provided the Company with a significant cost savings. In 1996, Rescue 53 was purchased in response to the significant increase in service demands placed on BFC with the opening of Interstate 476. The celebration of our 75th anniversary began in 1998 and spilled over into 1999. Numerous events were held including a community day and parade. The parade also celebrated the placing into service the new Snorkel 53 and the transferring of the High Ranger to the Delaware County Emergency Services Training Center. Major advancements in equipment included additional hydraulic operated rescue tools and the purchase of two infrared cameras for search and rescue operations.

Providing the community with the very best in emergency services has always been paramount to the Broomall Fire Company. The safety of our citizens and members is our primary concern. It’s for this reason that we continually strive to update and modernize our equipment and firefighting methods. Today, we operate a fleet of vehicles specifically designed and equipped to meet the current and future needs of our community. Our members receive the finest in protective equipment and training. As we endeavor to meet the challenges of the twenty-first century, we encourage you to join with us and continue our tradition of a 100% volunteer organization. Vehicle Fire Slows Traffic on I-476